Vespa has been manufacturing scooters since 1946 and is arguably the world’s most famous manufacturer of iconic city motorcycles.

Now he’s bringing the retro machine into the 21st century with the launch of a zero-emission fully electric scooter called the Vespa Elettrica.

Boasting a range of 62 miles and better performance than the 50cc petrol alternative, Piaggio, maker of the Vespa scooter, says it’s tailor-made for city driving. 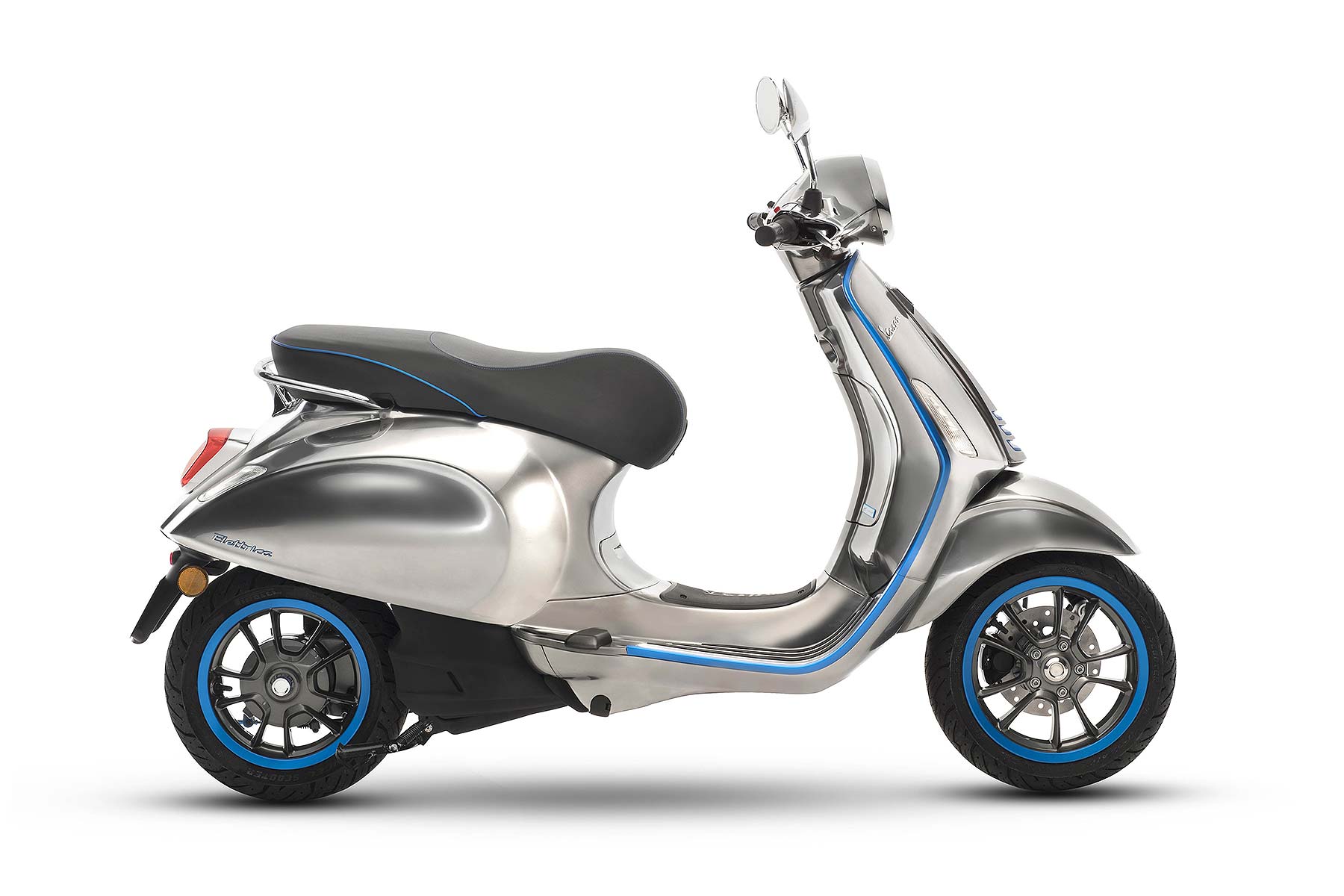 Plus, with a remarkable 147 lb-ft of torque, it has pulling power equivalent to that of a 125 hp 1.0-liter Ecoboost Ford Fiesta, delivering “brilliant” response and acceleration far from the line.

When riders slow down, it recharges the battery – Vespa calls it an F1-style KERS system, but in reality, this is just an electrical regeneration function of the regular battery.

Because the scooter is so light, it can get away with a small 4.2kW ​​lithium-ion battery. Even with a conventional household outlet, the charging time is four hours: it will be even faster with larger capacity public chargers.

Vespa says the battery should stay in peak condition for 1,000 full charge cycles, which equates to about 43,000 miles or 10 years of use. Even then, it will still have 80% of its capacity left.

The battery is located under the helmet compartment, so the Vespa Elettrica can still safely swallow a helmet when parked. 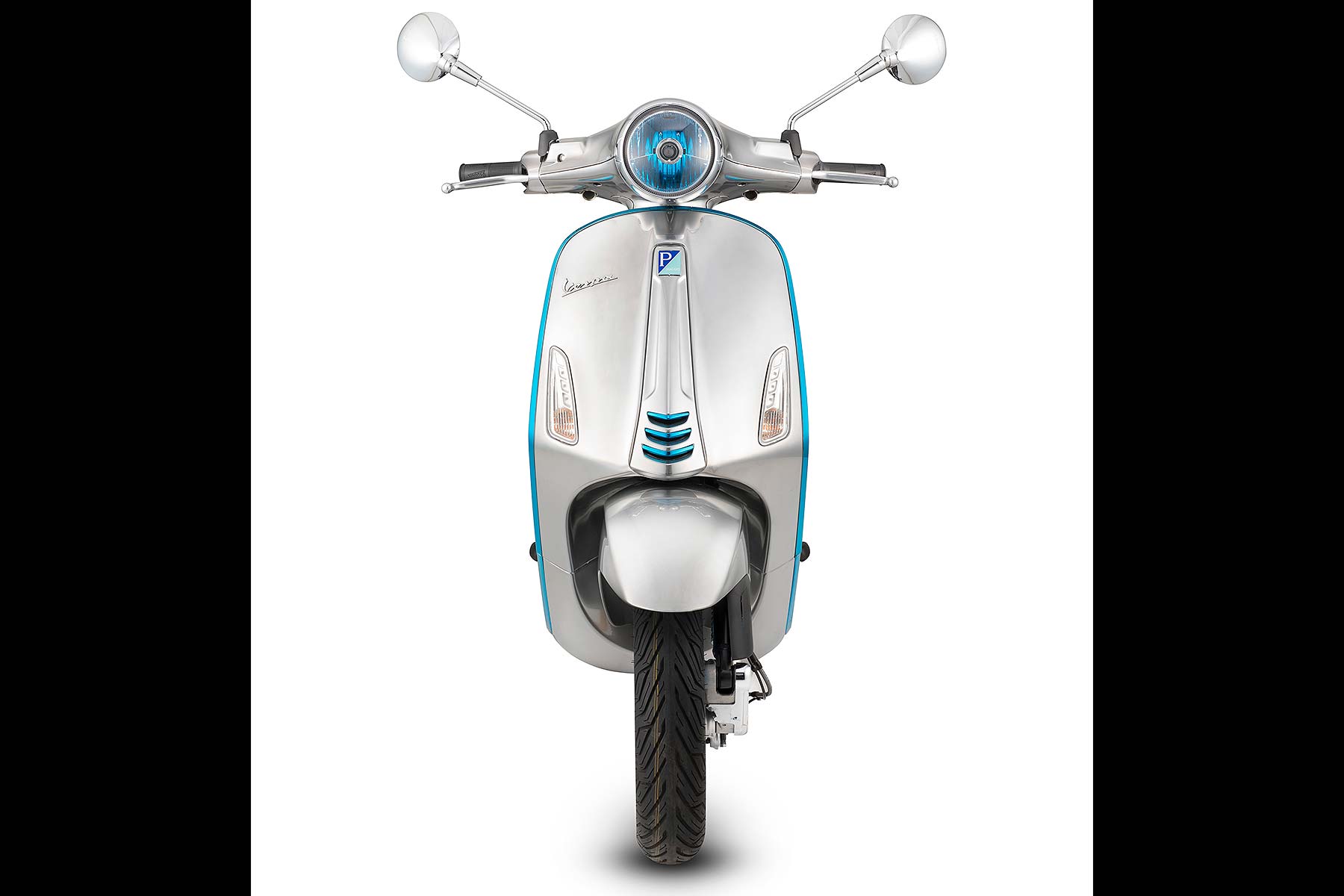 That’s not all. If you need more range, the company has unveiled an extendable scooter called the Vespa Elettrica X.

This combines a small gasoline generator, a three-liter fuel tank and a smaller battery: it will travel 50 km in fully electric mode, then 150 km with the generator, which gives a total range of almost 125 km.

It’s “ideal for riding out of town,” says Vespa.

Both scooters are equipped with a 4.3 inch TFT color display, including a multimedia system that connects to smartphones. Vespa has also developed a smartphone app that riders can use to view incoming calls and messages on the screen.

The new range of Vespa Elettrica scooters will go on sale in October, first in Italy, before expanding to Europe. Sales will then expand to North America and Asia from early 2019.

Prices? Still to be confirmed. But don’t expect a retro price for this all-electric Vespa scooter …

Every year, Indonesians, from teenagers to grandfathers to mechanics and students, come together in East Java to celebrate their love for the iconic Italian scooter Vespa.

For some, it’s a kind of “extreme” love, where vehicles are personalized to resemble metallic monster motorcycles straight out of a Hollywood dystopia.

Hundreds of enthusiasts come to the Kediri Festival to show off their creations, ranging from restored vintage Vespas to Mad Max-style tanks fitted with mock machine guns, a dozen extra tires, or weird plush toys as hood ornaments. (Click https://reut.rs/2PAoAGT to see a set of photos of the “extreme” Vespa enthusiasts at the festival.)

To compete in the festival, every custom vehicle must have a Vespa engine and most competitors try to keep the brand’s signature fairing – the curved front of the scooter.

But other embellishments depend on the owners and their budgets. While many can only afford scrap metal or reused materials found in a landfill, others are splashing about.

Peded, a 43-year-old grandfather who has been modifying Vespas since the 1990s, says he likes his scooter to “tell a story”.

“I love decorating Vespas to the extreme, but I don’t like using trash,” said Peded, whose Vespa sports massive buffalo horns from the Toraja tribal land on the island of Sulawesi.

The three-day festival, now in its third year, is one of many held across the country. Highlights include a competition to choose the best entry and track races for speeder motorcycles.

Enthusiasts attract the eyes and smiles of locals because of their elaborate Vespa designs.

As vehicles are often unlicensed, many travel at night to avoid traffic police. Mechanical problems arise, some of the more dilapidated machines often break down.

Most of the time, the gatherings are about catching up with other Vespa enthusiasts and having fun. “We are independent, but we come together as a community,” said 19-year-old Julia Ningsih.

“The extreme Vespa guys, we stay together. If we have any problems on the road, they will wait and help us until we can ride again,” she added.

(This story was not edited by Devdiscourse staff and is auto-generated from a syndicated feed.)

The iconic Vespa scooter goes electric! Italian two-wheeler major Piaggio announced today that it will start production of Vespa Elettrica (electric scooter) in September. The long-awaited electric version of the Vespa scooter will be produced at the Pontedera plant in the province of Pisa, the same where Vespa first went off the line in 1946. The facility is today one of the leaders global technologies in terms of the design, development and production of advanced mobility solutions.

From October, the first batch of Vespa electric scooters will be available for booking, exclusively online on the dedicated website, which the company says will incorporate innovative all-inclusive financing formulas that will join conventional purchasing systems. . Piaggio specifies that the price will be in line with the high-end segment of the Vespa range currently on the market.

The Vespa Elettrica will be introduced to the European market from the end of October reaching its full scale in November to coincide with the EICMA show in Milan 2018. Sales will begin in Europe and then expand to the United States and Asia from early 2019.

The major of two-wheelers affirms that the Vespa Elettrica is a first step for the Piaggio group towards a new wealth of interconnection between vehicles and human operators. The e-scooter will be ready to be fitted in the near future with solutions under development for Gita, the robot currently under study at Piaggio Fast Forward in Boston (which will go into production in early 2019), as well as as a artificial intelligence systems both adaptive and responsive to all human input. They will be aware of people and other vehicles moving nearby, extend the operator’s ability to detect potential dangers and opportunities, and provide real-time map and traffic data that helps improve the design of transportation infrastructure. in the towns.

The company claims that these next-generation vehicles will know their operators perfectly, that they will be able to recognize them without a key fob, anticipate driving choices, interact with other devices and vehicles on the road and to allow a higher degree of customization.

Technical specifications
The powertrain of the Vespa Elettrica delivers 2 kW of continuous power and a peak power of 4 kW, a torque of over 200 Nm, which she claims is greater than that of a traditional 50cc scooter and has a range maximum of 100 km. The e-scooter is equipped with a modern lithium-ion battery and an efficient energy recovery system (KERS, Kinetic Energy Recovery System), which recharges during deceleration, and can be recharged in 4 hours about.

Is the Vespa Elettrica coming to India?

In a previous interaction with Professional Coach, Diego Graffi, CEO and Managing Director of Piaggio Vehicles India, said the company made a very clear choice to always be different from other companies when it entered the Indian market. “Whenever we plan to enter the market with these products, we will consider full localization as we need to keep the prices affordable here,” Graffi said. Piaggio had already presented the electric Vespa at Auto Expo 2018 held in New Delhi, and had also hinted that it would consider launching electric vehicles in India.

Recently we have seen a plethora of electric scooter brands making their mark in Nepal. Each brand tries to seize the unexplored market of the “green scooter”. With brands like Terra Motors, NIU and Benling recently launched, Vmoto has joined the list with its latest T1.5 electric scooter. Successor of the previous generation of Vmoto T1, it features few improvements and quirks.

Vmoto is an Australian brand, introduced in Nepal by Asta Auto, the authorized distributors of VMOTO in Nepal. The company silently launched Vmoto T1.5. According to the company, it is already on the market and consumers can buy it now! The price of T1.5 Vmoto in Nepal is Rs. 1,15,000.

Vmoto T1.5 is equipped with 1500 watt brushless DC motor. It offers decent performance with a maximum power of 1500 watts. As for top performance, the maximum torque is 95 NM and the maximum speed is 45-50 km / h. Inside, it is powered by a 20AH lead acid battery that operates on 60V. In addition, the battery will take about 6-8 hours to fully charge. Unfortunately, that only gives you a range of 55 km.

The rear and front suspensions are hydraulic and telescopic respectively. In addition to that, it comes with 90/90 -12 “alloy tires which are standard in all electric scooters. On the safety side, it is equipped with a front disc brake and drum brakes. The ground clearance for the T1.5 is 155mm, which might not be enough to eliminate higher retarders. But they’ll still get the job done. Another list of key features includes Zero Emission, Remote Control, 1-2-3 Power Mode, Regenerative Brake, and more.

Vmoto T1.5 has its own unique list of features to set it apart from the competition. However, that doesn’t make it more attractive in comparison. Okay, let me walk you through the pros and cons. First of all, it’s a hell of a light scooter with a curb weight of just 95 kg. This is one of the main selling points of the scooter. It will offer cyclists comfort with quick maneuverability. Another advantage will be the after-sales service. Buyers will get 2 years free support service with an additional 1 year warranty on the scooter itself.

However, it also has a few shortcomings. The design is very similar to that of NIU Civic, especially with the placement of the LED light. But that shouldn’t affect daily commuting. My biggest complaint will be the battery and range. Charging the battery for 6 to 8 hours for a range of only 55 km does not seem so reasonable. And the speed is capped at 45-50 km / h.

I hope Vmoto counteracts these specific issues next time around. Apart from that, the datasheet corresponds to the asking price. However, I will recommend that you check and compare a few other electric scooters like Benling’s Eagle King and NIU’s N1 before choosing the right one.

What do you think of Vmoto’s T1.5 electric scooter? Is it worth the price? What are some things you loved and hated about this scooter? Tell us about it in the comments below!